November 19, 2020 REDWIRE is news you can use from leading suppliers. Powered by FRASERS. 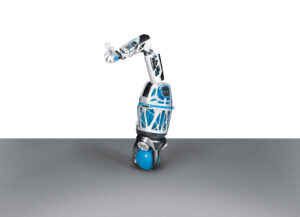 Bionic Mobile Assistant – A robotic helper with some novel wrinkles. it has a modular design embodying three subsystems: a mobile robot, an electric robot arm and the Bionic SoftHand 2.0, the pneumatic gripper that mimics the human hand.

Festo Canada’s renowned Bionic Learning Network has unveiled another unique robotic concept: the Bionic Mobile Assistant, a collaborative robot with advanced gripping technology that mimics the workings of the human hand. The Mobile Assistant’s capabilities suggest many future commercial applications – as a workplace helper, personal assistant, or service robot. In addition, it could perform ergonomically strenuous or monotonous assembly tasks, or fulfill simple roles in challenging environments, like serving meals in potentially infected areas in hospitals.

The Festo team has designed this solution by integrating three major subsystems. The first, Bionic SoftHand 2.0, is an upgrade of a pneumatic gripper that imitates hand movement and action. The second is the DynaArm electric robot arm on which the user mounts the SoftHand; the third is a ballbot for 360-degree mobility.

The SoftHand in the Bionic Mobile Assistant integrates compact valve technology, sensors, electronics, and mechanical components in the tightest spaces to emulate the human hand’s unique blend of force, dexterity, and fine motor skills. The fingers and opposable thumb are made of flexible bellows structures with air chambers, which makes the hand light and adaptable, but still forceful when required. A three-dimensional-printed wrist with two degrees of freedom enables hand movement back, forth, left, and right.

Each air chamber contains two structural elements that act like bones, to boost finger stability. A bending sensor determines fingertip position. The hand wears a glove with tactile force sensors, so it can sense the nature of the object to be gripped and adapt the force appropriately. A depth camera in the wrist allows the hand to detect objects visually and grip them even when they are partly covered.

With its lightweight design, the DynaArm can carry out quick, dynamic movement. The robot balances on the ballbot, a sophisticated drive allowing the Bionic Mobile Assistant to move freely in any direction; it also can work autonomously.

Watch this video for a better look at this Festo tool: