January 19, 2022 REDWIRE is news you can use from leading suppliers. Powered by FRASERS. 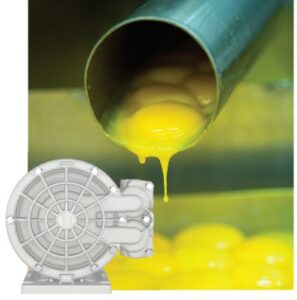 An egg company benefited from another John Brooks Company recommendation.

The current pumps leaked, and they could not handle the caustic chemicals required in the sanitation process. This necessitated replacement every six months, which hiked capital expenses. Other issues for the customer: unscheduled downtime, production loss, and safety risks from the leaks, all due to constant breakdowns and replacement.

The customer needed a better solution, so it contacted an application expert with John Brooks Company. Since the existing pumps were insufficient for pumping caustic chemicals, the expert suggested replacing them with the Velocity series. Chosen for its competitive price, versatility, and reliability, the Velocity series consumed less air than the previous pumps had, and their fewer components reduced breakdown possibilities.

The Wilden Velocity series comprises compact AODD pumps designed with versatility. Each unit has a unique detachable mounting foot that enables reorientation into a horizontal or vertical position, with multiple inlet and discharge-port options, which are important for skids and systems. As a positive-displacement pumps, it has two flexible diaphragms that alternate filling and discharging two pumping chambers as they move. Compressed air feeds into air chambers and vents from them, on opposite sides of the other chambers, to make the pump work. The Velocity series can self-prime, deadhead, and run dry with low shear, which allows the pumps to reach the desired flow rate quickly and maintain it during a full production run.

The egg-processing company is still using these Velocity pumps today, with no issues.

For a closer look at the Velocity series, watch this video: