Vibra Finish Limited Has Mastered Industrial Finishing for Half a Century

July 27, 2021 REDWIRE is news you can use from leading suppliers. Powered by FRASERS. 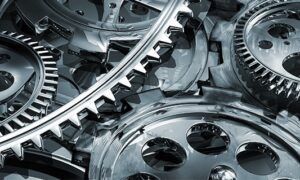 Vibra Finish Limited is observing its 50th anniversary as a finishing provider this year.

Vibra Finish Limited has earned a wide-ranging reputation for its industrial finishing capabilities. Finishing is a vital part of metal manufacturing, and Vibra Finish Limited has long mastered many techniques in this area, such as deburring, burnishing, descaling, and rust removal. Most significantly, the company specializes in vibratory finishing – an innovative process for finishing high volumes of uniform parts efficiently – as well as Vibropeening, its own unique method of strengthening metal surfaces.

Customers have counted on Vibra Finish Limited for 50 years. The company was established in 1971 as a production-finishing facility. It expanded two years later when it began manufacturing its own line of vibratory finishing equipment. Vibra Finish Limited continued to grow over the years, hitting a major growth period in the mid-1990s: not only did the company open a second production-finishing facility and a new warehouse; it also became certified according to the ISO 9001 quality standard. Its industrial finishing abilities expanded even further in 1999, when its machinery-building branch relocated to a larger facility.

Twenty years later, Vibra Finish Limited continues to grow its reputation for world-class industrial finishing skills. The company uses the vibratory finishing process to deburr, burnish, descale, clean, radius, and generally improve metal surfaces. This mass-finishing technique does not depend on operator skill – the way hand polishing, buffing, filing, and belting do – but lends itself to uniformity and batch security. The Vibra Finish Limited crew typically loads parts in bulk for long-batch processes or feeds them continually into vibratory machines for cellular manufacturing. The vibration causes different kinds of media to scrub all areas of the parts, as compounds are employed to help the media with cleaning and finishing. The team also uses equipment to change the amplitude and frequency of the vibration and alter the ratio between forward motion and vibration.

Vibra Finish Limited’s stringent quality-control program helps its staff ensure that they are processing parts in a way that perfectly meet the customer’s individual needs and wants. This drive to satisfy clients is why Vibra Finish Limited continues to be successful, decades later.