July 13, 2021 REDWIRE is news you can use from leading suppliers. Powered by FRASERS. 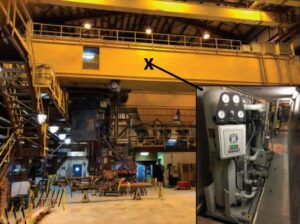 Of the many customer success stories in John Brooks Company’s history, a recent one involved an aluminum plant with its siphoning-application problem. The application experts at John Brooks Company recommended a custom-engineered desiccant dryer system, an air-treatment solution with a dewpoint of -40 degrees Celsius, to improve efficiency in the facility and solve this dangerous, challenging problem. Other benefits included less breakage, less downtime, and higher reliability and productivity.

During production, the plant used overhead cranes to replace anodes in electrolysis pots and siphon the aluminum out. The compressors released oil due to the cranes’ compressed-air networks, but the coolers could not reduce the compressed-air temperature enough, which created more oil vapours. Premature contamination of the desiccant in the air dryer resulted from vapours passing through the pre-filtration. Another problem for this customer was that air moisture was forming rust in the pneumatic controls in the compressed-air systems; mixing water with molten aluminum will cause an explosive reaction.

The customer consulted with an application expert from John Brooks Company, who suggested an SPX Flow PPC custom-engineered, heatless desiccant dryer system. The low dew point of this system would eliminate rust formation in piping and prevent freezing problems. John Brooks Company installed a centrifugal mechanical separator and oil mist eliminator before the prefilter to capture the bulk of fluid and particulates to extend the prefilter’s life.

Among the benefits of this new system:

The Result: 78 Per Cent Increase in Production Time and Reduced Breakage and Maintenance:
This desiccant dryer system was a substantial success. Adding the air-treatment system reduced the maintenance time and chances of equipment failure. The overhead cranes remained in the halls — and out of the garage, completing their tasks for much longer than they previously had, which means more production and more revenue.