December 4, 2020 REDWIRE is news you can use from leading suppliers. Powered by FRASERS.


Red-D-Arc Welderentals has an impressive record of customer success stories. Among the most recent: a business contacted... Read more 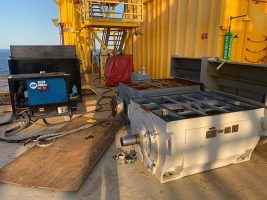 Red-D-Arc Welderentals has an impressive record of customer success stories. Among the most recent: a business contacted the company for help in removing a coupling hub from a motor shaft with induction heating, to replace the motor with a new one. This hub was a foot in diameter and four inches thick.

As this work was to be done on an offshore platform, using an open flame would be a safety violation. Another challenge in this project was the time limit.

The task had to be done within 48 hours, as the end user had limited time to shut down the gas recovery compressor. Shipping the whole motor to land and back would waste time and money. The coupling hub had to be reused, so workers would have to install it on the new motor.

To begin the project, the Red-D-Arc team conducted a two-hour training session on its Miller ProHeat 35 liquid-cooled system at its Houston facility. Rated for an output of 35 kilowatts, this equipment can reach temperatures as high as 787 degrees Celsius. Users can operate it in either a manual or a temperature-based programming mode.

After the training, the customer set up a hub puller/strongback assembly and added a hydraulic load cell to put pressure on the hub. The next step was to set up the ProHeat 35 and wrap the induction lines around the hub, a process that took ten minutes. Because open flames were out of the question, the client used the system in manual mode. The hub temperature would be monitored and tracked with two handheld infrared temperature guns.

The user started the machine and let it stabilize, then allowed the temperature to increase while holding the ProHeat at 27 kilowatts. After placing the unit on hold, he adjusted the output to 33 kilowatts and ran the process again. Soon, the coupling hub’s temp rose to 187 degrees Celsius and the hub popped off.

The full process lasted only 27 minutes, from the setup to the machine shutdown. All was done safely and quickly.


Red-D-Arc Welderentals has an impressive record of customer success stories. Among the most recent: a business contacted... Read more