How a baking solution provider benefited from Jacob tubing components

September 16, 2020 REDWIRE is news you can use from leading suppliers. Powered by FRASERS.


Jacob tubing components and systems offer perfect solutions for many manufacturing facilities, and they are available in... Read more 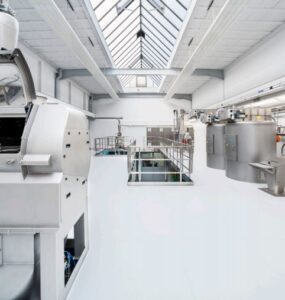 Jacob tubing components and systems offer perfect solutions for many manufacturing facilities, and they are available in Canada via Firing Industries. They are particularly recommended for food or sensitive goods. A recent Jacob success story involved the Bühler Company, which specializes in flour processing and bakery technology, among other areas.

Bühler presents technical solutions for the bakery sector at the BIC, which completely covers bakery processes from conception to production. The company decided to extend the BIC to include an application area for baked goods and premix production – thereby covering the full value-added chain from the mill to the bakery.

The customer installed Jacob tube and press-formed components in the tube areas for bulk material handling and exhaust air aspiration. Since the systems in question were used to process food products, Bühler exclusively used tubing components from the Food Grade line – which fulfills the requirements of EC 1935/2004 and the United States Food and Drug Administration. The company also added blue U-shaped gaskets, which detect metal, thanks to incorporated metal particles.

The challenge was to assemble as much of this technology as possible in the BIC’s limited space without losing flexibility. Bühler used the existing space in a optimal way with Jacob modular tubing components. In addition, the Quick Connect program made modification or rebuilding of the system possible according to the latest requirements – so Bühler could carry out compound tests of various system parts and replace or supplement process equipment easily.

Another special feature was a non-return valve, which was implemented as a special regulation solution to keep the aspiration-line flow speed constant. A two-way valve was added before the last sugar channel to enable bagging without this component – and clean emptying of residue.

With the help of Firing Industries as a supplier, Canadian manufacturers can yield similar advantages from Jacob’s unique solutions.


Jacob tubing components and systems offer perfect solutions for many manufacturing facilities, and they are available in... Read more