May 26, 2022 REDWIRE is news you can use from leading suppliers. Powered by FRASERS. 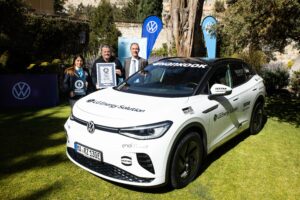 Known for more than 75 years of innovative connection technology, the HARTING Technology Group and its local affiliate, HARTING Canada, are strong supporters of electric vehicles. Recently, the corporation sponsored another jaunt by professional driver Rainer Zietlow, who set another Guinness world record: the highest altitude ever achieved by an electric car.

In his fully electric Volkswagen ID.4 GTX, Zietlow ascended 5,816 metres above sea level on the volcano Uturuncu in Bolivia.

The endurance of electric cars

The goal of this drive was to climb the highest, still passable road in the world on Uturuncu to its maximum altitude – and thereby prove the endurance of electric cars one more time. Zietlow and his team of three drove to Bolivia with their sights set on this road, which the Quetena community recently repaired at the foot of the volcano to encourage tourism.

Zietlow wanted to show the world that electric vehicles are capable of peak performance, even when taken to extreme altitudes. Throughout the route taken, through Argentina and Bolivia, the driver used the ENEL X wall box network. Sponsored by HARTING, the drive was also designed to support the SOS Children’s Village in La Paz, Bolivia.

On Monday, May 23, a Guinness World Records representative presented the Guinness World Records title to Zietlow at the German embassy in La Paz. HARTING was excited to participate once again in setting a new record title for electric vehicles, as the company is eager to showcase the viability of electric vehicles as an option in any condition. Electric cars like the Volkswagen ID.4 GTX are suitable for drives for long distances or high altitudes. Not only is the technology reliable – it is here and ready to implement.

Last year, HARTING actively supported another record-setting Zietlow journey: a trek across the United States, in a Volkswagen ID.4 electric SUV. This trip crossed more than 56,000 kilometres through 47 states for 97 days. Not only did this double a previous record; it also proved the endurance of electric cars over long distances. HARTING helps to promote sustainable futures.