November 10, 2022 REDWIRE is news you can use from leading suppliers. Powered by FRASERS. 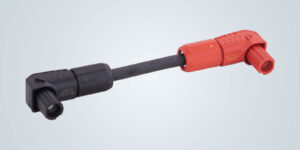 The Han S series was introduced at Hannover Messe.

Last year, HARTING Canada launched the Han S series of connectors for cabling. This line, including the Han S 200 model, gives users secure connection technology for modular battery storage systems. The compact and flexible housings accommodate contacts for currents of up to 200 A and 1,500 volts.

Users can flexibly rotate the bulkhead housings through 360 degrees in this series, while the locking of hoods and housings for male and female contacts is intuitive.

Businesses can achieve sustainable use of wind, solar power, and other renewable energy sources only through energy-storage modules, which enable time-delayed, needs-based use. This allows the generated energy to be used in a delayed, demand-driven way. The Han S 200 system cabling points the way to a future sustainable energy system. This HARTING solution resists high temperatures and radiation, and it features fast installation and setup.

The Han S 200 system cabling is perfect for the front wiring of modular battery storage systems, with easy, quick, and safe contacting. The connector has a red variant for the positive terminal and a black variant for the negative one; both are mechanically coded to stop incorrect insertion, which saves time during service or maintenance. The female contacts include three cross-sections, with a cable that offers high resistance to oil, fuel, high temperatures, and ultraviolet rays.

A key benefit of pre-assembled cable: it allows fast, simple initial commissioning. In addition, this plug-and-play connector is usable without any tooling, storage, or labour expenses, which significantly lowers the total cost of operating materials. The HARTING team tests the assemblies fully according to its own high quality standards. Other major advantages of the Has S 200:

Introduced at the Hannover Messe trade show in April 2021, the Han S series is the first HARTING connector line developed for front-mounting energy-storage systems, allowing users to build these systems on the basis of battery modules.