June 27, 2022 REDWIRE is news you can use from leading suppliers. Powered by FRASERS. 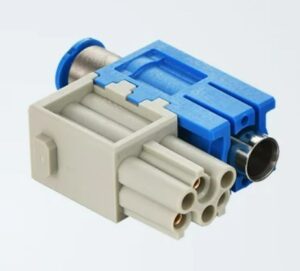 The next level of modular industrial connectors has arrived. HARTING Canada has launched the Han-Modular Domino module series, developed to work with the foundation for today’s industrial transformation – which is formed by interfaces for the transmission of power, data, and signals and other basic technologies. This new series reduces the carbon-dioxide footprint by opening up space and weight savings of up to 50 per cent, as well as other new possibilities for optimization.

With these advantages, these modules serve as the next development stage of the modular connector. The Domino series primarily complies with industry requirements for saving installation weight and space. Modelled after a domino, which has two separate squares, a Domino module is made up of two “cubes”. The typical Han-Modular mating face is divided into two nearly square surfaces, in which the device can accommodate ever larger contacts.

The cubes support the configuration of customized connectors precisely tailored to the needs of a design. Users can blend power, signal, data, compressed air, or male and female contacts in one unit. This lowers the overall number of necessary interfaces per device. The connection technology becomes smaller and more lightweight, and more modules and module types fit into one connector than ever before.

A key advantage is fast, easy installation. The shorter assembly times reduce the overall labour input, which picks up on the megatrend of demographic change and counteracts the shortage of skilled employees. The lighter and smaller interfaces support decarbonization. In 2015, a major rail manufacturer calculated that a train in operation saves US$14,000 in energy expenses with every kilogram of weight over 40 years of service; this value is substantially higher today because of inflation.

The Domino series is part of the HARTING Connectivity+ category of solutions that adapt to social megatrends like demographic change and sustainability. This is because these modules help to lower costs in machine and system assembly and operation to save resources, such as using less material and energy to make smaller components and adding flexibility to transport from space and weight savings.