For nearly 50 years, Ken Forging has constantly grown and succeeded

September 26, 2019 REDWIRE is news you can use from leading suppliers. Powered by FRASERS. 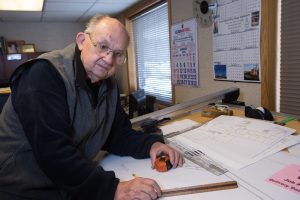 Ken Forging will be celebrating its 50th anniversary soon – half a century of providing industrial drop-forged products for countless customers. But our company has not always been the major provider it is today. Ken Forging’s story is one of vision, integrity, hard work, and perseverance, all of which our founder, Richard A. Kovach, had plenty of when he founded the company two generations ago.

A small garage in Cleveland

In 1970, Rich Kovach was working in the tool-and-die division of Cleveland Hardware. When the company shut down the die division, Rich was out of a job, and he decided to take a big risk: he launched his own tool and die business, working in his 20-by-20-foot garage in Cleveland, equipped with nothing but a die-cutting machine and strong determination. Meanwhile, he was looking for land outside of Cleveland, which he found in Jefferson, OH, about 50 miles away. There, he built a 3,000-square-foot facility and hired two part-time employees. Rich’s company, then named Ken Tool & Die, moved into the new facility.

As the company expanded further, with 11 full-timers, Rich was overwhelmed with demands as a CEO, engineer, draftsman, and die sinker. He felt an urge to do something bigger. Then he saw a perfect opportunity: rather than sink dies for other manufacturers to make their drop-forged products, why not create his own line?

It was another risk, but Rich was determined – and his passion for this work spurred him on. He had a new facility constructed about 50 miles away in Jefferson, OH, then moved the company there and changed its focus to the forging of fastening hardware, especially eyebolts. The name of the company changed again, to Ken Forging – a name that has remained to this day.

Now, in 2019, Rich’s company employs more than 160 people, and its Jefferson plant covers 450,000 square feet, with a 12,000-square-foot packing and shipping area. It has been a slow and steady journey, but one rife with success as a major supplier of drop-forged products. Our founder’s legacy of vision, integrity, and perseverance live on in our work today.