January 10, 2022 REDWIRE is news you can use from leading suppliers. Powered by FRASERS. 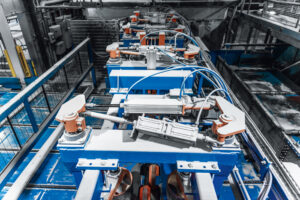 There is a lot of technology working behind the curtain driving the world’s fastest band-saw line. How fast? “With our new automated saw, we can achieve a speed of 150 metres per minute,” says Johan Fredriksson about production at the Sävar Såg sawmill of Swedish timber supplier Norra Timber. “This makes it the fastest band-saw line in the world.” The modular line was supplied by the Swedish subsidiary of USNR and includes CPX/VTSA flexible function valve terminals from Festo in key places for actuating the pneumatic and hydraulic systems.

Sävar Såg’s log supply comes from the vast pine and spruce forests in the north of the country. Supply is not a concern. “However, given the tough competition in the timber industry, it is crucial to invest in advanced technology in order to increase productivity and therefore yields,” says Fredriksson, a production developer for Norra Timber.

A further highlight of the sawmill is a computer tomograph upstream of the band-saw line that analyzes the quality of the logs and enables an optimal cutting pattern. It also detects any foreign matter, such as rocks, that could damage the saw blades.

Automation technology from Festo plays a critical role in the line’s modular design. Thanks to the CPX/VTSA terminals, the flexible fieldbus modules and the large number of classic Festo DNC pneumatic cylinders, the plant modules can be adapted to individual customer requirements. In addition, the reduced wiring for the valve terminal technology shortens the time needed for installation and commissioning.

The connection to the process control level is maintained by the CPX fieldbus module. “Here in Sweden, we mostly use PROFINET, or Modbus® from Schneider Electric, for other customers in Europe,” says Jonas Ljung, a design manager at USNR. “In the U.S. and Canada, however, the band-saw line can be supplied with EtherNet/IP or DeviceNet® on the CPX.”

(Heavy-duty VTSA manifolds are used extensively in industry in Canada and have a proven record of great reliability and durability.)

The Sävar Såg band saw not only is faster, but also higher yielding, as Fredriksson notes: “Up to now, we could only use 50 per cent of a log for sawed boards. With the new band-saw line, we have increased the timber yield per log by six per cent.” That gives the mill an annual rated output to 270,000 cubic metres of sawed boards. The rest of the log is turned into wood shavings used for the pulp and paper industry, as well as sawdust and bark for the sawmill’s combined heat and power station to generate the heat for the drying kilns.

“The new band-saw line is superior to other sawing technologies because it generates relatively little sawdust and wood shavings, thanks to its fine and precise cuts,” says Fredriksson. A further benefit is the reduced distances between the logs along the conveyor section, thanks to the band-saw line’s individual modules, allowing the high band speed to be used to the full. 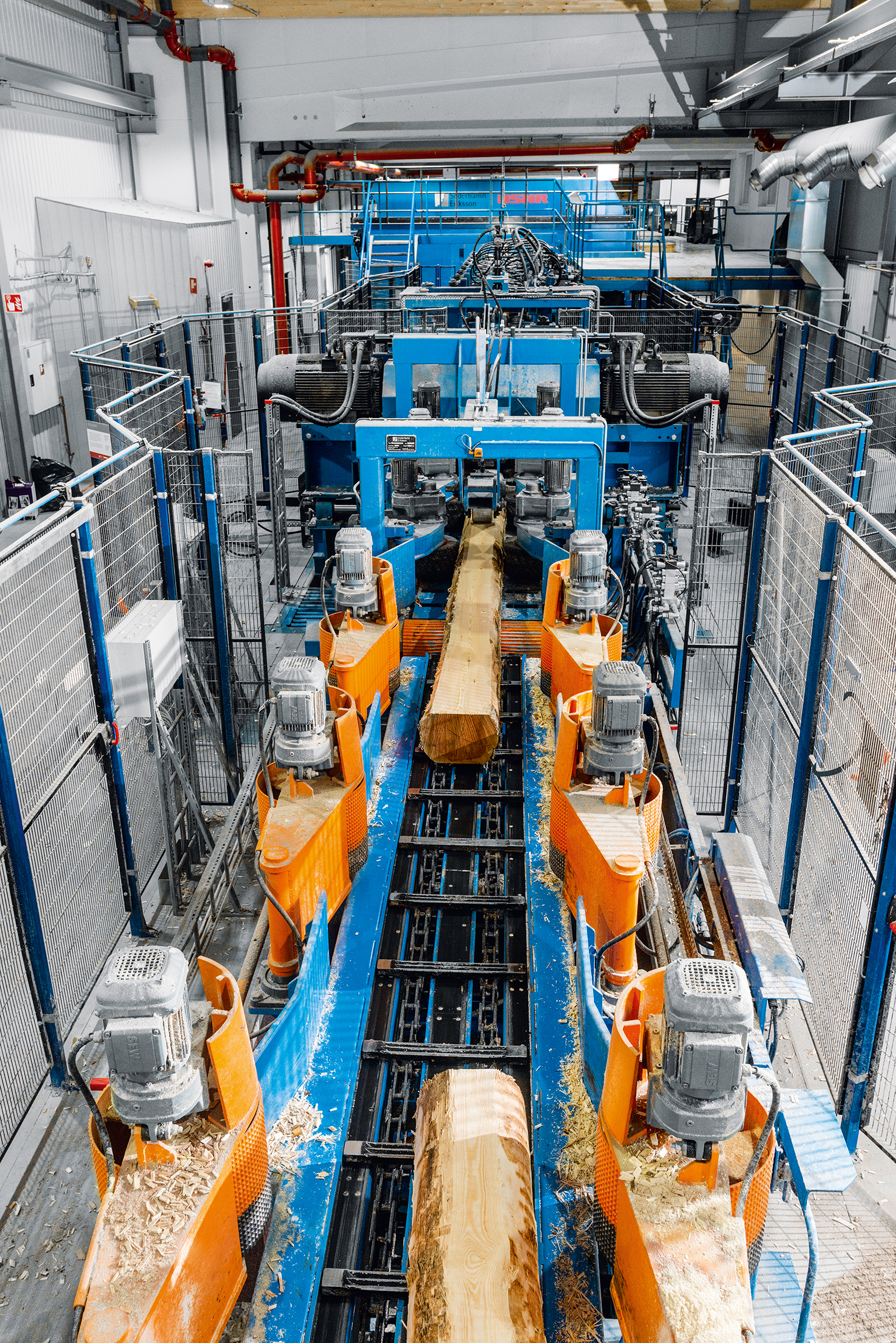 The high belt speed of the band saw line is possible thanks to precise cutting and the shorter distances between the logs. 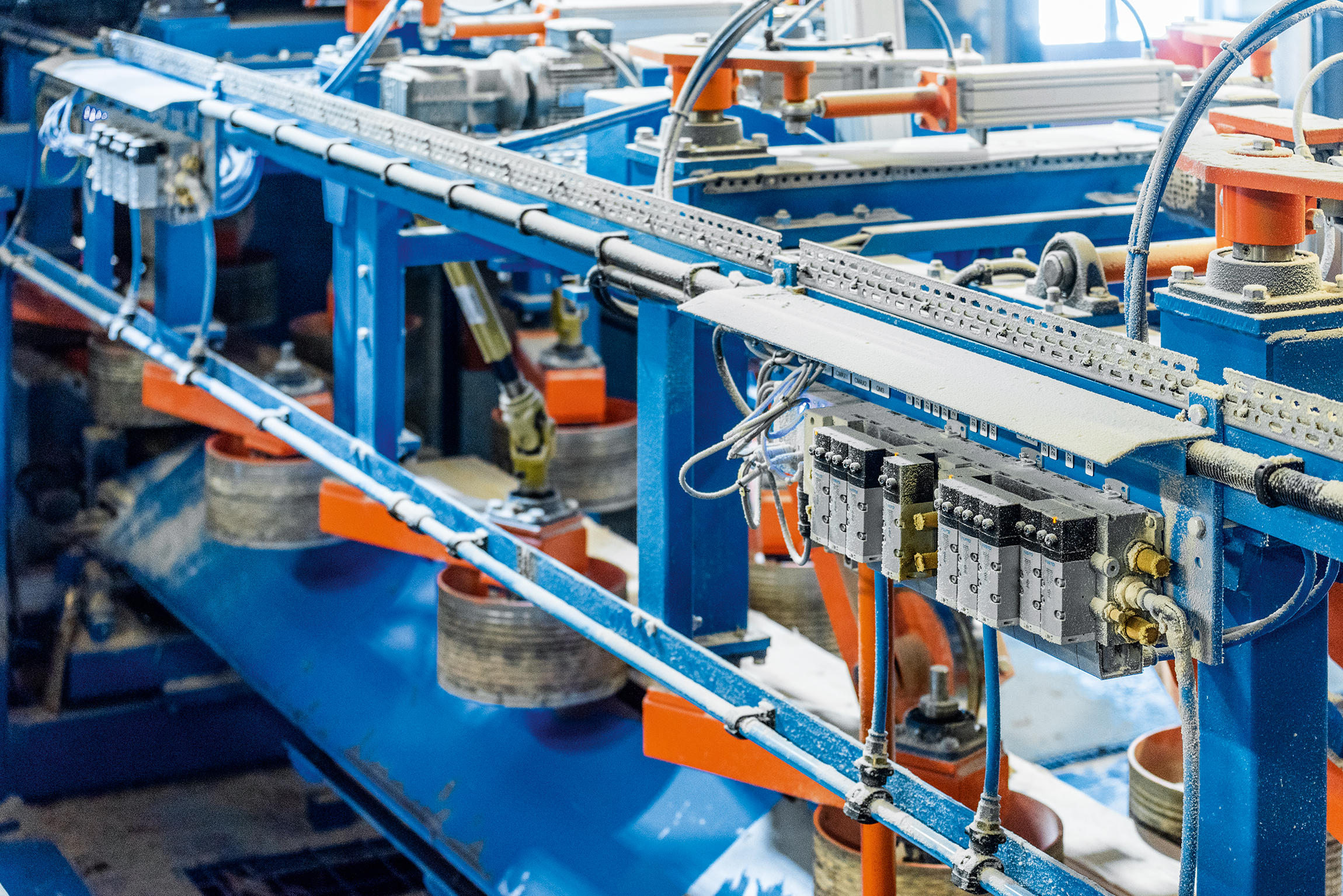 “The CPX automation platform and function-integrated CPX/VTSA valve terminals that actuate all drives – no matter whether pneumatic, servo-pneumatic or hydraulic – also play a major role in our modular design,” remarks Jonas Ljung, design manager at USNR. The robust valve terminals, with IP65 protection, can handle dust, sawdust, and wood shavings and are operated with different pressure zones. They actuate the many pneumatic DNC and ADN pneumatic cylinders that carry out positioning, clamping, centring, and transport functions.

Hydraulic drives get their electrical pulses via CPX. If greater flexibility is required because of the different dimensions of the logs, making the clamping and centring positions different, the pneumatic cylinders are actuated using Festo’s servo-pneumatic CMAX axis controller, a module incorporated into the CPX/VTSA. The DNC cylinders used for physical adjustments are equipped with a displacement encoder to ensure precise positioning.

Control-cabinet assembly is not necessary with the CPX/VTSA because of its IP65 rating. Thanks to this and fieldbus technology, the time for installation and commissioning is reduced by 65 per cent. There is less need for wiring, since there are also 80 per cent fewer connection points. “Also important for us is that Festo has been our partner in automation technology for more than ten years and their automation experts are always on hand with service and advice – worldwide,” says Ljung.