December 3, 2020 REDWIRE is news you can use from leading suppliers. Powered by FRASERS. 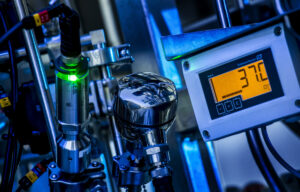 Solutions are available for temperature management.

Temperature management is a constant challenge in Ultra High Temperature (UHT) processing of milk and other nutrient solutions, according to Endress+Hauser Canada Ltd. The medium is exposed to temperatures in a range of 135-140 degrees Celsius – for a brief period, just a few seconds, to kill bacteria. The temperature is raised in stages to that range through a pre-heating process that first exposes the medium to a noncritical temperature in a 70-80°C range. There may be slight variations in temperature and exposure time, but the process is heavily dependent on highly accurate temperature measurement and very fast data transmission. Safe sterilization can be guaranteed only if the temperature does not fall below the minimum requirement at any time, or the batch may have to be destroyed.

Older process thermometers used in UHT and other beverage production force users to make a choice: install models with or without thermowells. A thermowell is part of the thermometer, like an outer shell, which hosts the actual sensor (the latter is also referred to as an insert when installed in a thermowell). The thermowell protects the sensor from the sometimes harsh process conditions, but presents a barrier between the sensor and process medium, which negatively affects the performance of the meter and has to be accounted for. Yet, thermowells offer compensating advantages: for one, during recalibration of the sensor, only insert is removed. The thermowell remains in place so there is no exposure of the contact surfaces to the ambient environment and no need for an additional CIP cleaning.

Now, advances in thermometer technology from Endress+Hauser dispense with this either-or dilemma. Tommy Mikkelsen, a metrologist at Chr. Hansen’s Avedoere Holme plant in Denmark, conducted extensive testing of Endress+Hauser’s iTHERM TM411 sensor with and without the thermowell, and in both cases, measured deviations in temperature were below 0.1 degrees Celsius. It also delivered 50 per cent faster response times than the older sensors being used in the plant. When installed, the modular iTHERM TM411 RTD thermometer allowed the plant to maintain a constant temperature within a very narrow range, which it had not been able to do consistently with older thermometers. Leaving the thermowell in place while an individual sensor is being calibrated also allows production to continue uninterrupted. The QuickNeck variant of the iTHERM TM411 also allows for tool-free disengagement of the sensor from the thermowell in just a few seconds for onsite calibration, minimizing production downtime. “There had been problems with former temperature sensors Chr. Hansen had been using in this application for the last six or seven years,” says Mikkelsen. “Now these problems are history.”

Additionally, over time, many dairies and other food and beverage processors accumulate multiple different thermometers throughout their plants, which complicates maintenance and procurement. The modular TM411 includes multiple sensor, transmitter, terminal head and process connections options that give it universal application throughout process environments. At the Hohenwestedt plant of German milk producer DMK, switching to the TM411 allowed the operator to standardize all plant temperature measurement with just the one model. “We had used about 30 different types of temperature sensors and it was not particularly easy for maintenance to act very quickly to address any errors,” says Patrick Hilbert, Head of Maintenance Engineering at DMK, Germany’s largest milk producer. The iTHERM TM411 offered “all the features we wanted in just one model – we could use just one temperature sensor with various process adaptors on site to meet the needs of the system.”