January 24, 2023 REDWIRE is news you can use from leading suppliers. Powered by FRASERS. 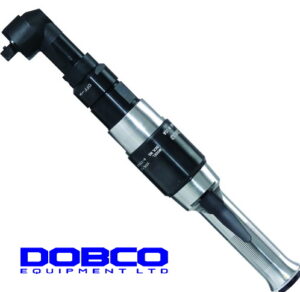 Dobco Equipment Ltd. is the leading supplier of industrial power tools in Canada, offering products by a wide spectrum of international manufacturers – including Cleco Tools. Cleco makes more than 500 types of nutrunners among its pneumatic assembly tools, including angle nutrunners, available in multiple designs and series for various applications.

Among the features of the 75 series is a heavy-duty Cleco motor, which is the industry standard for dependability, as well as planetary gears designed specifically for tool speed changes with minimal parts service and replacement. These angle nutrunners also have heavy-duty spindle bearings and splined retractable spindles that reduce friction, boost torque repeatability, and extend the operational life of the tool. Reversible and non-reversible models are available, and each model has external torque adjustment, a rotating exhaust deflector, and a ½- and ¾-inch square drive.

The 75 series of angle nutrunners consists of five models that range in torque from 95 to 430 newton metres. Free speed ranges from 90 to 280 revolutions per minute, with an air inlet size of ½ an inch and minimum hose inner diameter of 5/8 of an inch on each model. The series consists of three 11.4-pound models and two 13.1-pound units; the two heavier instruments each measure 20.1 inches in length, 2¾ inches in angle-head height, and 1.44 inches from side to centre. The three 11.4-pound nutrunners each measure 19.4 inches in length and 1.09 inches from side to centre, while two of them have an 11.4-inch angle-head height and the other has an angle-head height of 2½ inches.

There are several other series of Cleco angle nutrunners available from Dobco. The 55 series has many similarities to the 75 series, including the motor, planetary gears, and spindle bearings. Other options include tools with sliding-knob or twist-ring reversibility, plus ones with start buttons instead of levers. Trust Cleco for the height of nutrunner solutions.