September 15, 2021 REDWIRE is news you can use from leading suppliers. Powered by FRASERS. 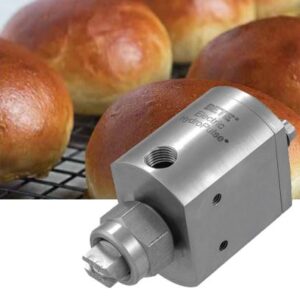 John Brooks Company Limited has numerous customer success stories to back up its reputation as a supplier of industrial fluid-control products. One case involved a major manufacturer of hamburger buns that was having issues with an insufficient egg-wash application system. With the help of Bete HydroPulse spray nozzles, John Brooks Company provided a solution that minimized downtime while improving productivity and efficiency, eliminating safety risks, lowering maintenance expenses, and reducing wasted egg-wash product.

The current egg-wash system was using air-atomizing nozzles that created too much mist when they spraying the chilled wash on the buns, and this resulted in extra cleaning time to remove the egg wash from the equipment. The bun company was also concerned about clogging, which led to unexpected maintenance shutdowns, and also about employee health and safety.

For a better solution, the customer contacted the application experts at John Brooks Company. After examining the scenario, these experts concluded that the egg-wash solution needed a stable temperature of 15½ degrees Celsius and had to be sprayed at a pressure no higher than 15 pounds per square inch (psi).

The recommended alternative: a turnkey system with a ThermoCube 500 inline chiller, spray bar with nozzles, and control panel with a custom-built interface. John Brooks Company specified Bete HydroPulse nozzles to give better performance than that of the air-atomizing units, while eliminating the clogging and misting problems. Working in tandem with the nozzles, the control panel would provide precision spray control, reducing over-spray.

In the recommended system, egg wash would be pumped into a 200-gallon pressure pot at 15 psi. The inline chiller would recirculate the solution to keep the temperature steady at 15½ degrees Celsius. Then the solution would be fed to a spray bar over the conveyor and HydroPulse spray, with nozzles used to apply the egg wash onto the buns.

The result: another happy customer that made its manufacturing operations more efficient and safe. A typical outcome for John Brooks Company.